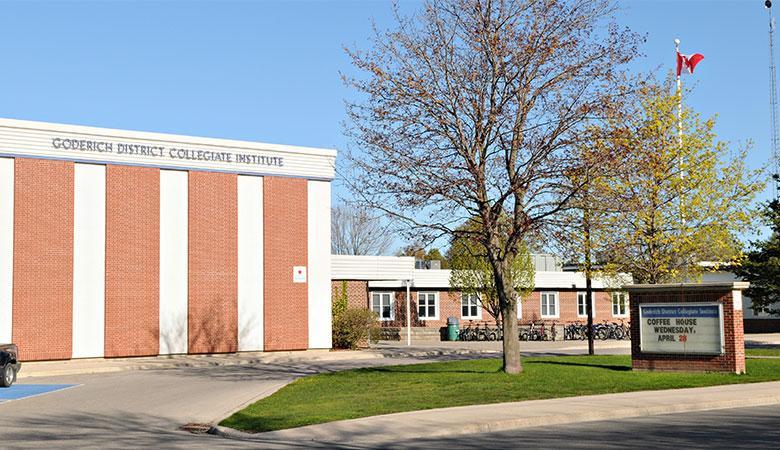 Goderich District Collegiate Institute (‘GDCI’) is a secondary school in Goderich, Ontario.   The school opened in 1841 when it was established as a Grammar School.  The school was privately run for over 30 years. In 1874, the local School Board purchased a site at the corners of Picton Street, Wellington Street, and Elgin Avenue in Goderich, and opened the new G.D.C.I. in 1875.  G.D.C.I. is now home to 536 students from around Goderich and area.  In the late 1970’s and early 1980’s the school had an enrolment in excess of 1000 students.

This building was expanded three times and eventually replaced in 1951 with the current building on South Street. There have been several additions, such as the West Gym which was added in 1965, along with the Technical Wing and the library. Additional renovations included the remodeling of the science labs and geography rooms in 1990, as well as a complete redesign to expand the library.  The front foyer and main office had extensive renovations in 2005 to enlarge the student services area incorporate the main office into what was the board room and a portion of the front foyer.

In 2010, G.D.C.I. welcomed students in grades 7 and 8. This followed the merging of Victoria Public School and Robertson Public School into one school, now known as Goderich Public School, during the 2009-2010 school year.